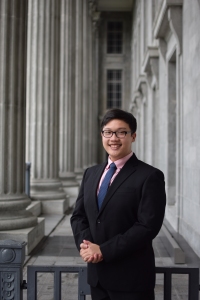 Not a stranger to MUNs, Thames is excited to put his organisational
skills back into practice again as one of the USG Logistics. Although he does not enjoy being a delegate, a decision he made fairly quickly after his first MUN, Thames finds it oddly thrilling to saikang as a notepasser or as a secretariat member. Whenever possible, Thames would flex his bona fide British accent, a trait he is most certainly proud of, and is sure will come in useful when he visits his namesake in London. Thames is also extremely enthused about drama, and hopes to be able to enrol in a drama school and ultimately be an actor in Singapore. But for now, he remains content with just binging TV series with British actors in them.